Ecology in the first place

Our planet is our home. Climate change, resource depletion and other environmental issues concern all of us and at Hyundai are well aware of this. Hyundai Motor Company has long been a leader in the production of cars with alternative fuel drives. These futuristic fuels should be environmentally friendly.

“Hyundai Motor Company values ​​human values ​​and fulfils its corporate and social responsibility through environmental protection in the name of harmony between man, the environment and society.”

We recognize the environment as a key element of business and create corporate values ​​by proactively promoting environmental management. We support the development and distribution of environmentally friendly products.

We are committed to reducing pollutants and protecting resources and energy for their sustainable use at all stages of our product lifecycle, from development through production, sales and use to disposal. We provide all of our employees with environmental training courses, support our suppliers in environmental management and contribute to the public good.

We comply with all international and national environmental laws, regulations and treaties. We continue to improve environmental management and present our activities to the public.

During the construction of the car factory, great emphasis was placed on environmental friendliness from the very beginning. More than a thousand trees in the area were not cut down but transplanted in a demanding manner.

At the plant, we have built a sophisticated logistics system based on the strategic location of the three main subcontractors directly in the industrial zone, two of which (Mobis and Transys) are connected to the Hyundai assembly shop using covered bridges. The volume of parts that are delivered to the assembly shop in a clean and silent manner is a daily load of 200 environmentally friendly trucks.

After the start of production, we introduced the ISO 14001 environmental management system, which we want to confirm and emphasize the importance of environmental responsibility in our company.

We use state-of-the-art technology and state-of-the-art laboratories to ensure environmental protection. We have implemented a waste management system throughout the production, but we also ensure their correct sorting.

Our paint shop uses water-based paints and all industrial waste water from the entire plant is cleaned in our own wastewater treatment plant using the latest procedures.

The shops are equipped with special air conditioning, which ensures direct removal of vapours and exhalations from the production process.

In December 2012, a device for the reduction of volatile organic compound (VOC) emissions by regenerative thermal oxidation (RTO) was put into operation next to the paint shop. The device sucks air contaminated by VOCs from the topcoat spray line and drying ovens and blows it into the combustion chamber, where the air is heated at elevated pressure and temperature of nearly 1000 degrees Celsius while the VOCs are burned; then the air is cooled and released freely into the atmosphere. The efficiency of this device is more than 97%.

The installation of paint spraying robots at the paint shop reduced paint consumption by 17% and organic solvents by 11.5%, and overall this reduced VOC emissions by 11%.

By installing new regulated energy-saving lighting in the Transmission Shop, we reduced the electricity consumption for lighting by 52%.

In the HMMC area, a park has been built for employees to take a break and have some rest with 37 trees and 600 m2 of grass area.

95% of the materials used in car manufacturing are recyclable. 88% of HMMC waste is recycled. We use low VOC materials. As the only car manufacturer in the Czech Republic, we hold the EMAS certificate.

After the start of production, we introduced the ISO 14001 environmental management system, which we want to confirm and emphasize the importance of environmental responsibility in our company. 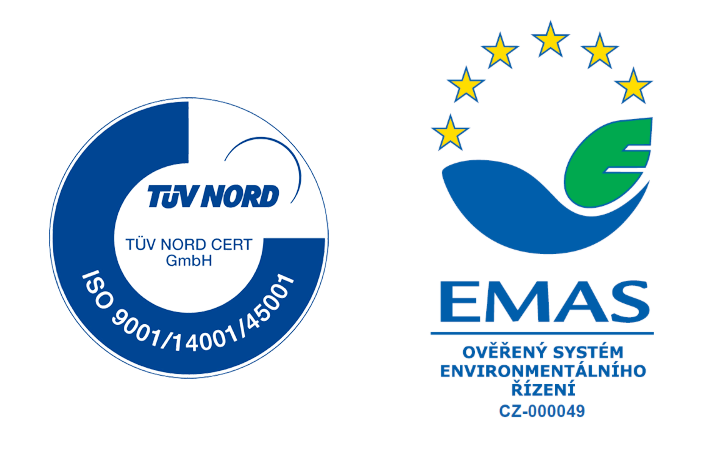 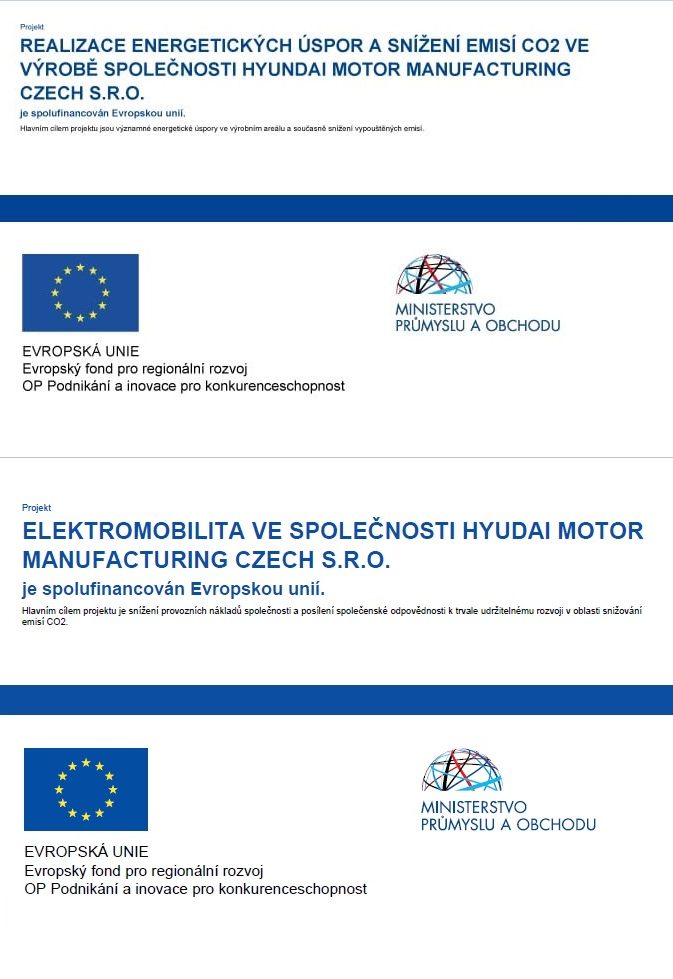 Few people know that the name Hyundai means “modern” in Korean language. The brand does everything to get this label. No one knows what will drive the cars of the future, but whatever alternative it will be, Hyundai is ready today. One of the main candidates for the replacement of internal combustion engines is undoubtedly the battery powered electric car.

The production of electric cars started with an inconspicuous mild-hybrid in 2018 in Nošovice. However, the real expansion of electromobility started in 2020, when the serial production of the Kona Electric model has been launched. Production has began in March 2020, during that time more than 37,000 of this electric car rolled out of the Nošovice gates. One year later in 2021, production of a plug-in hybrid version of the new Tucson has began, adding the latest missing piece to the electric car portfolio puzzle. Today, the factory in Nošovice produce everything from a mild-hybrid, through a classic hybrid and plug-in hybrid to a fully electric Kona Electric and of course, where are electric cars, there must be charging station. That is why project called Electromobility in the Hyundai Motor Manufacturing Czech Company was implemented within the grant program Low Carbon Technologies – Electromobility (from the Operational Program Enterprise and Innovation for Competitiveness). During two phases (from September 18, 2019 to February 5, 2020 and from January 1, 2020 to September 15, 2020) 10 charging stations for electric cars were built both indoors and outdoors, and a new Hyundai Kona Electric car was added to the company’s fleet. Eligible costs amounted to CZK was 5,121,500 of which 55% was covered by subsidies. The chargers supply electric cars which serve as shuttle vehicles inside the complex, as well as electric cars intended for testing.

The company also operates 5 Kona Electric electric cars as business travel vehicles in the vicinity of the plant in support of ecological mobility. These cars also get energy from charging stations from this program.

Information on the processing of personal data