Another milestone for the Hyundai Tucson: 1 million units produced. 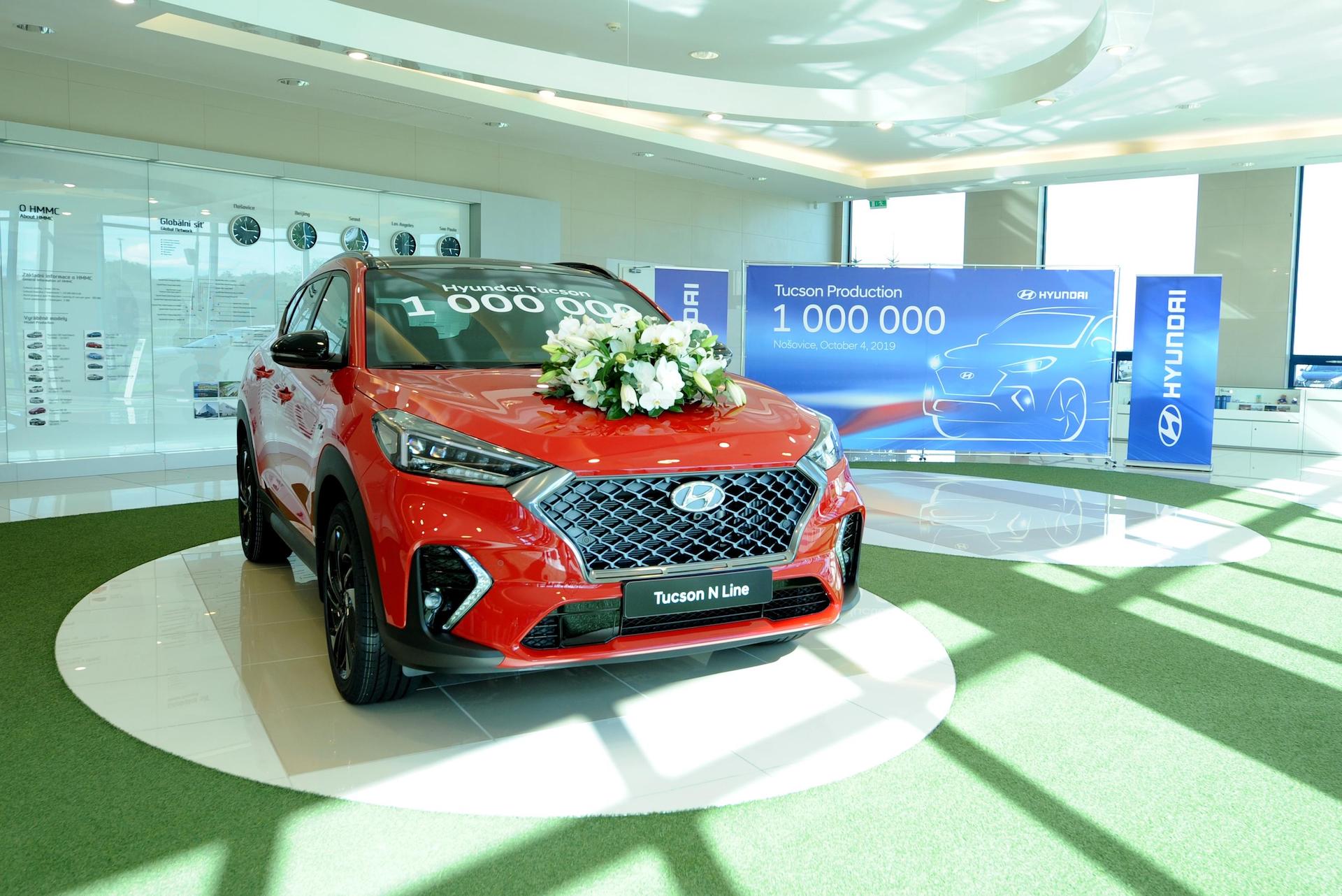 There is another celebration in Nošovice, one which is this year’s second significant milestone in the history of Hyundai Motor Manufacturing Czech (HMMC). At the end of May the car plant marked the production of its 3 millionth car there.  There will be cause to celebrate again at the beginning of October, this time thanks to the millionth Hyundai Tucson produced in Nošovice. The SUV, with its outstanding design and technical specifications, is the flagship product of Nošovice manufacturing facility, and sold in 67 countries on 5 continents.  The Tucson is approximately 70 % of production at Nošovice, and is the first SUV manufactured in the Czech Republic to achieve this million-car milestone, which took just 52 months.

This achievement with one car model is a major milestone for the Nošovice plant. Since it began production 11 years ago, this is the first model of car which has passed the one million units production mark. “This is an outstanding success. It’s important for us not just in terms of the volume of production. Manufacturing this important model of car for Hyundai in Europe has involved achieving and maintaining high standards in terms quality and technical ability for production. This has influenced our choice of suppliers and the number of jobs created,” said Miroslav Jasiok, Head of Production, HMMC.

When the brand-new Hyundai Tucson drove off the assembly line on 15th June 2015, it was the result of months and years of preparations, not least by the design team led by the renowned German Head Designer Peter Schreyer. Production engineers, technicians and test drivers, for the first time at the manufacturing plant, gave significant input into the process of setting up production of the new car.  “In the previous 7 years producing the other models, we gained valuable experience and enormous respect for the parent company. This meant we could assemble teams which had great expertise, made up of colleagues from across departments, who not only learnt who to manufacture the new car, but were also fully involved in the final development and testing of individual components. We significantly expanded our internal test car program and we used the test results to fine tune the design of the final version of the car. The Nošovice team played a major part in creating the current production version of the Hyundai Tucson, and we are justifiably proud of our contribution,” explains Martin Klíčník, Head of Quality at HMMC.

Increased production, new suppliers and new jobs in the region

Both in terms design and technical specifications, the Tucson is a major achievement for Hyundai. “The Tucson has succeeded in tough markets like Germany and the United Kingdom, and in dozens of other counties around the world, and won a number of awards. This success has prompted an increase in production here of the Tucson to the current 1100 cars, which is a major part of the 1500 cars we produce a day here in Nošovice,” says Miroslav Jasiok.  Apart from their popularity in European markets, Tucsons are exported to the Middle East, Africa, South America and Australia. You can see these ambassadors for Nošovice manufacturing expertise on the roads all around the world, from Iceland to South Africa, Mexico to New Zealand, and even on the exotic island location of Martinique.

So far in the Czech Republic the Hyundai Tucson has sold more than 15 thousand units. Apart from personal car sales, HMMC has prepared several special editions for companies who appreciate the advantages of this SUV. Special editions have been delivered to the Czech Forestry Commission, the Czech Highways Authority, and the Czech Police. A special edition Tucson appeared on the international stage for the FIFA World Cup 2018, for which Hyundai was an official partner.

Increased production as a result of increased demand naturally led to more jobs being created, and further relocation of suppliers, who are now based close to the car manufacturing plant. Today Hyundai employs approximately 3300 people, and suppliers in the region provide work for a further 8700.

Production of the new Tucson started only 4 years and 4 months ago, but the car has already undergone a facelift, the new sporty N Line range has been added, and in tune with our more ecological times, Mild Hybrid technology has been introduced. “This goes to show that the motoring world is in the midst of one of the most dynamic periods of change in its history. And Hyundai Tucson and its innovations are a great example of that,” adds Martin Klíčník.

Campaign to celebrate another milestone

The Nošovice plant has already celebrated the millionth car produced and is now focused on production. The sales team at Hyundai Motor Czech have decided to emphasise this achievement with an autumn campaign with and special offer of winter equipment and a competition, in which the winners, selected at random, win back the purchase price of their car. “We decided to run the competition to win a limited-edition Icebreaker version of the Hyundai Tucson to thank our customers and show how much we value them. It is our customers we have to thank for the success of the Tucson, the bestselling SUV in the EU. The production of the millionth Tucson car is an important milestone and we are doubly glad as it is manufactured here in the Czech Republic” says Jana Sekeráková, Head of Marketing at Hyundai Motor Czech.

Made for Europe, in Europe: new i30 begins production