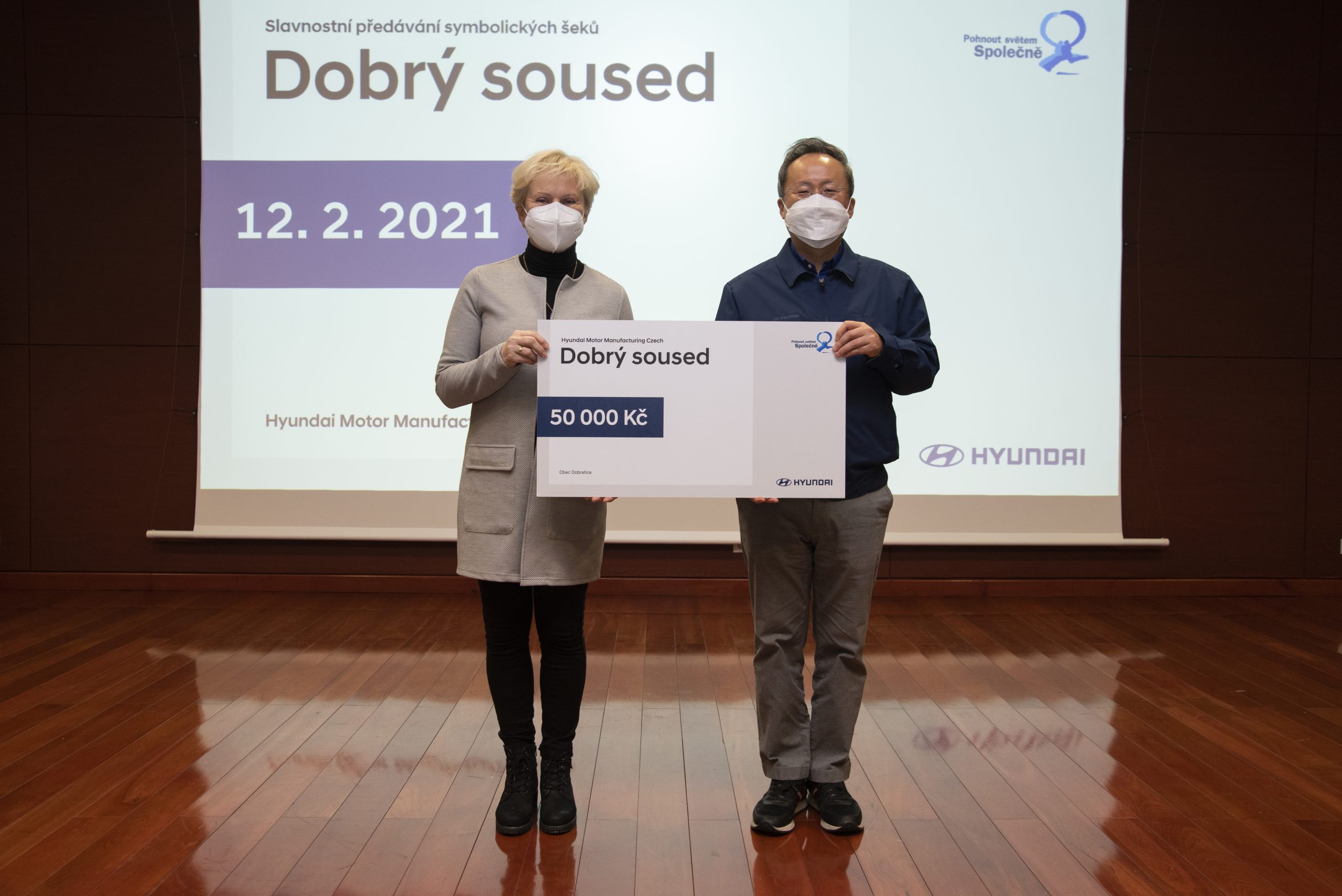 Carmaker Hyundai in Nošovice is not neglecting support of municipalities in its neighbourhood. Symbolic checks were handed-over in the tenth year of Good Neighbour program. Checks were in total value of 700 000 CZK to support projects which were nominated by municipalities.

Hyundai Motor Manufacturing Czech company (HMMC) is participating on development of the region on a long term basis. Corporate social responsibility is integral part of company strategy. Thirteen municipalities get financial support in Good Neighbour program. HMMC donates 50 000 CZK to each of them. And so municipalities Dobrá, Dobratice, Dolní Domaslavice, Dolní Tošanovice, Horní Domaslavice, Horní Tošanovice, Nižní Lhoty, Nošovice, Pazderna, Raškovice, Třanovice, Vojkovice and Vyšní Lhoty can look forward to a contribution for this year. This money will be used for their sport, culture and community life.
“Each support for municipalities is twice as important these days. We want municipalities in our neighbourhood to prosper and to come to life again with social events and community projects as soon as the situation allows that. We perceive that our financial aid in Good Neighbour program is important for municipalities. That’s why we are glad to help as a good neighbour,” said president of HMMC Cheolseung Baek.
Money will be used not only for organizing of culture-social events but also for purchase of needed equipment for local associations.
Třanovice and Dobratice will get financial support in a project “Good Neighbour Together” on the top of that. Both municipalities will get another 25 000 CZK. In Dobratice, money will be used to further refining of forest park which was built last year. “We would like to complete planting of trees because this was not happening there. We still need to cut down few trees and clean the forest,” said mayor of Dobratice Alena Kacířová.
Carmaker’s employees will also be able to take part in this project and they will also help in Třanovice with project of planting flowers at school in the program Good Neighbour Together. “It is positive that Hyundai is interested in cooperation with municipalities and that the company cares about lives of municipalities and their citizens,” said mayor of Třanovice Jiří Tomiczek about cooperation with HMMC. Mayor of Dobratice also appreciate cooperation with the carmaker. “Contact with Hyundai company, which is a large employer, is valuable for us. On one hand, it brings us money, and the meeting when accepting checks is also pleasant. We are also introduced to what news are happening in the company,” added Alena Kacířová.
This year’s event was significantly shorter because of pandemic and government restrictions. But it doesn’t change the fact that HMMC cares about good relationship with its neighbours from the very beginning. Company strives to be responsible to its neighbourhood in all activities and production processes because it is an integral part of it.