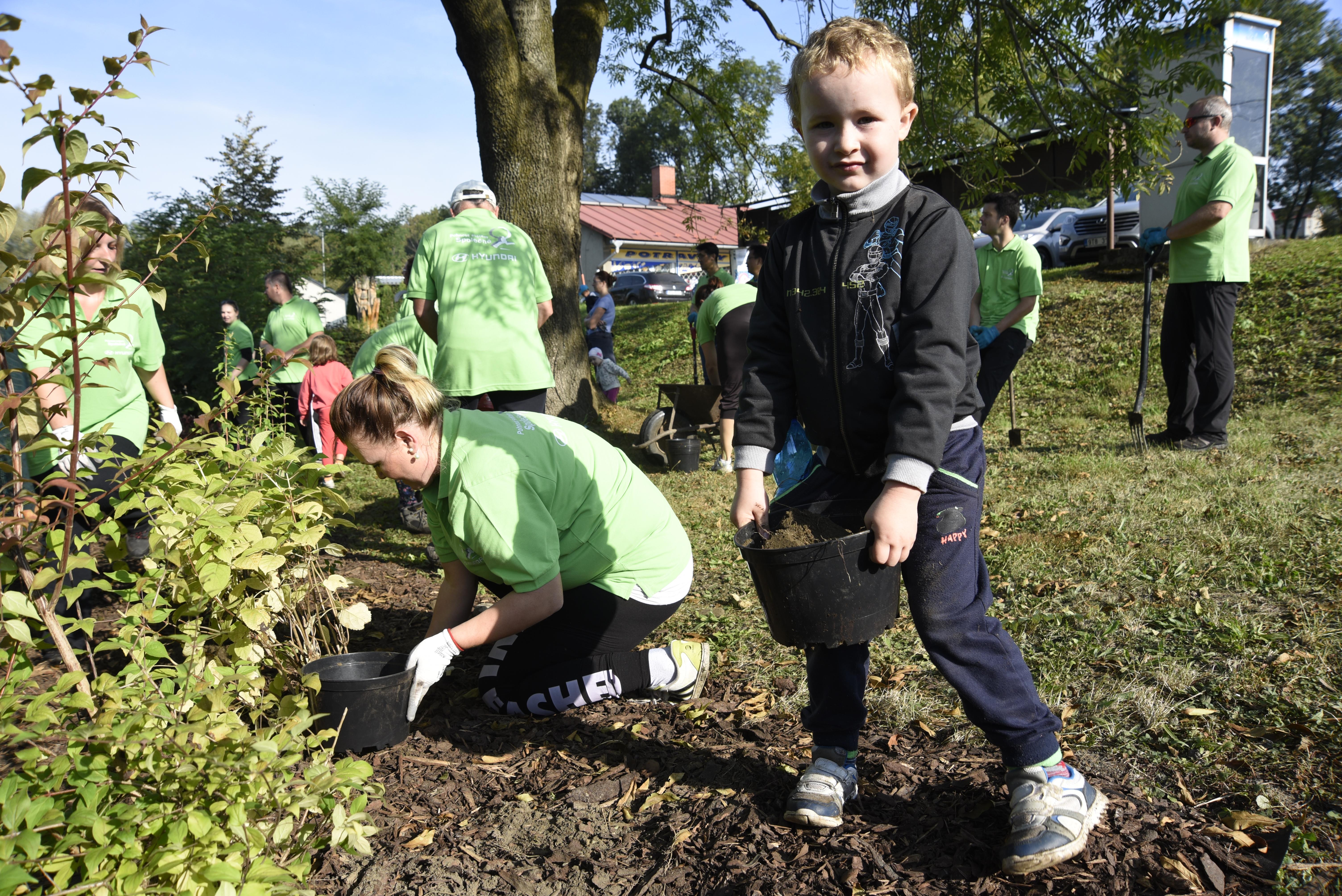 If you plant a hundred bushes, a primary school garden gets a protective barrier against noise and dust. That was the thought on 1st October of parents of children of the Vojkovice Nursery School near Frýdek-Místek, and of the volunteers – Hyundai Motor Manufacturing Czech employees.

As part of the program “Good neighbour / Together” they planted more than a hundred bushes and shrubs, around the fence of the nursery school garden and protects children from the noise and dust coming from the nearby busy roads. And because nearly everyone had come with children, there were plenty of people to help and it only took an hour to complete the work. This wasn’t the first project of its type. In April, as part of the same project HMMC employees and local residents transplanted trees on and noise barrier in Nošovice.

But now back to Vojkovice: the adults measured the gaps between the bushes, dug holes, took away the dug earth and planted bushes and shrubs, the children worked on getting the dug earth into the wheelbarrows, put compost into the holes around the new plants and helped out where they could. This is how the participants reacted to the day’s work:

“I carried soil in a bucket,“ beamed another little helper, František.

Helena Karpecká, principal at the Vojkovice nursery school, couldn’t hide her enthusiasm. “I’m so glad that so many people came along. I didn’t expect this many.”

“I think we did really well,” said the Mayor of Vojkovice, Hana Sobková, and added, “the weather smiled on us and lots of people turned up. This project will benefit our children and it’s a great example of cooperation with Hyundai. I can’t say anything more than that.“

And what about the parents? Barbora Cieslarová, who has two children at the school, summed it up like this: “it’s an excellent project and it’s important that it’s cooperation, because a lot of people from around here work at Hyundai, not only from here in Vojkovice, so it’s good that the company does something extra for people who live here.”

HMMC employee Stanislav Zahradník took part with his two young boys, and said, “I was happy to come along because it’s a good thing for the school and I also have children of nursery school age. We also take part in events like this in our village, so of course we’ll take part in this, especially as the company has organised it.”

Jae Kyung Cho, Vice President of HMMC thanked all those who took part. “Thanks to the parents and our employees for taking part today. You did some good work for children and I’m sure that events like this help to build good relationships between HMMC and the local region.”