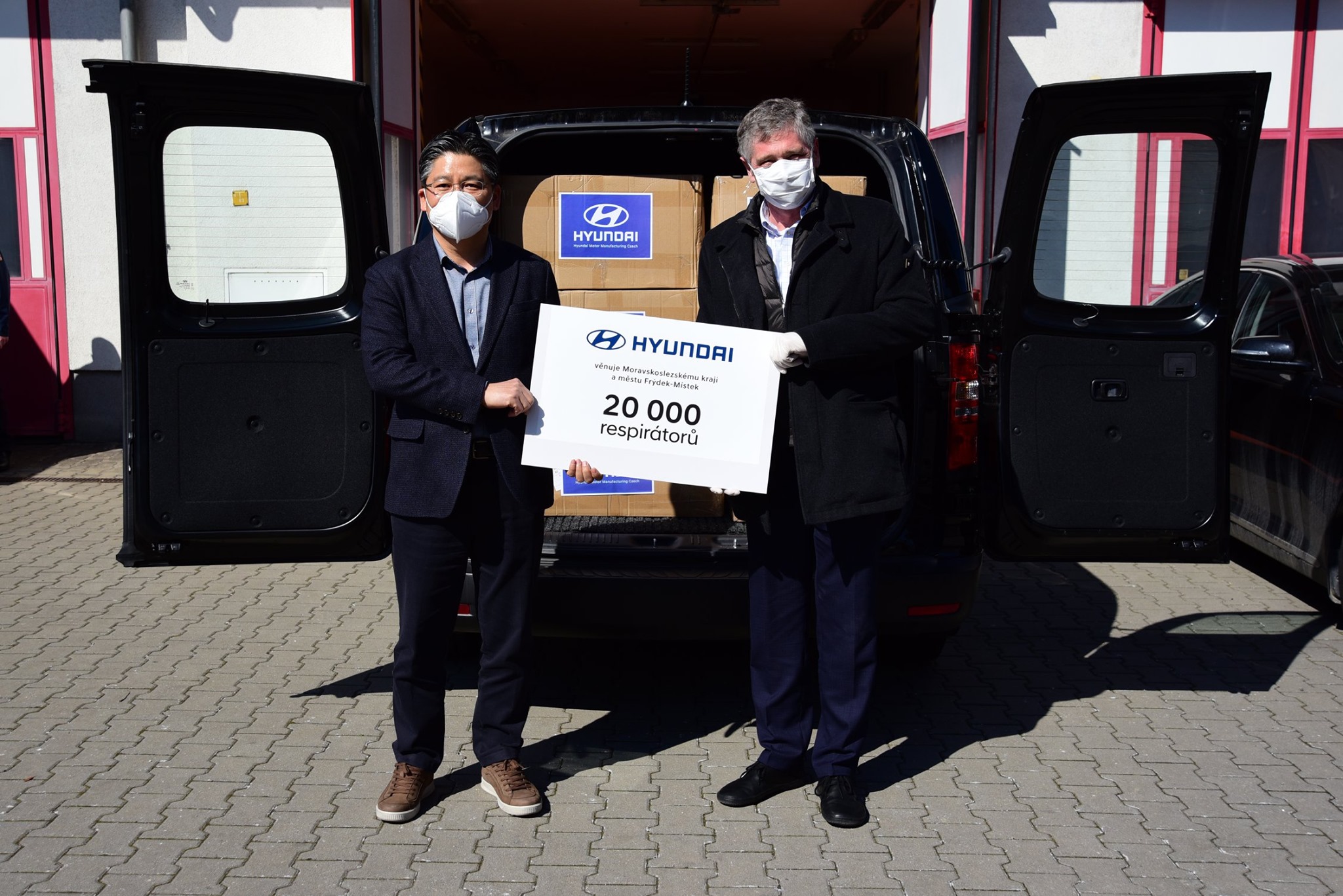 Nošovice’s carmaker Hyundai Motor Manufacturing Czech handed over 21,300 FFP2 respirators worth over CZK 3,250,000 to the Moravian-Silesian Region, Frýdek-Místek and thirteen municipalities around the plant. They are designed for all health care professionals and the Integrated Rescue System fighting against COVID-19 in the first line, as well as the currently most vulnerable group of people – the elderly and the chronically ill people.

The handover of respirators is a part of a donation by the carmaker and the Czech representation of the brand Hyundai Motor Czech which also includes a financial donation of CZK 10,000,000 to the Government of the Czech Republic with the aim of purchasing the necessary medical equipment.

“Social responsibility to the region in which we operate is an important part of our corporate culture. Therefore we help there in the long term. In this difficult time, we know how important is a concrete help, especially for paramedics and rescuers working hard in the front line, as well as the most vulnerable group of older people. We are pleased to see that both finance and respirators are starting to help,” said Jin Park, vice president of Administration Division, Hyundai Motor Manufacturing Czech.

Last week prime minister Andrej Babiš and Minister of Industry and Trade and Minister of Transport Karel Havlíček received the financial gift at the Government Office in Straka Academy. This week, the supply of respirators first arrived at the municipality of Frýdek-Místek, where 5,000 units were personally taken over by the Mayor of the city, Michal Pobucký. “I must thank as a representative of the whole town of Frýdek-Místek and all the citizens for this great gift. It’s the 5,000 FFP2 respirators we need in our social services. At the moment we need them for clients of this services and for nurses and doctors,” Michal Pobucký said.

The handover of 15,000 respirators intended for the Moravian-Silesian Region was personally supervised by the governor Ivo Vondrák. “In time like this each thousand of respirators is helping us. The demand is enormous. It is necessary to distribute respirators not only among our medical staff, but also to social services which are most in risk because they take care of the elderly. The fifteen thousand respirators we receive from Hyundai will go into circulation immediately,” Ivo Vondrák described the next steps.

All 21,300 respirators will be distributed by the end of this week through the distribution networks of the Moravian-Silesian Region, the town of Frýdek-Místek and selected municipalities. First line warriors such as medical facilities, hospitals, doctors, dentists, pharmacies and integrated rescue services will be equipped by them as well as the most vulnerable groups – the elderly and the chronically ill people. Respirators will also be distributed to selected retirement homes in Ostrava and Frýdek-Místek.
Municipalities around the plant associated to the Good Neighbor program received 100 respirators each, 1,300 in total. Mayors further divided them to seniors or volunteer firefighters and volunteers who help with the distribution of food for the elderly or citizens of municipalities in quarantine. Specifically, the villages are Dobrá, Dobratice, Dolní Domaslavice, Dolní Tošanovice, Horní Domaslavice, Horní Tošanovice, Nižní Lhoty, Nošovice, Pazderna, Raškovice, Třanovice, Vojkovice and Vyšní Lhoty.

Hyundai Motor Manufacturing Czech has been helping in the Moravian-Silesian region for a long time
Hyundai helps, for example, through a grant program launched in 2016. It financially supports projects dedicated to children and the handicapped people or various sports and cultural events held in the region. This year it has earmarked 640,000 CZK for them and the application for the grant program is in progress. For nine years it has been providing financial support for selected projects from municipalities around the Nošovice‘s plant through the Good Neighbor program. The municipalities received a total of 700,000 CZK this February. In the 13 years of its existence the Hyundai Foundation has distributed more than 20,000,000 CZK for environmental protection and community projects.