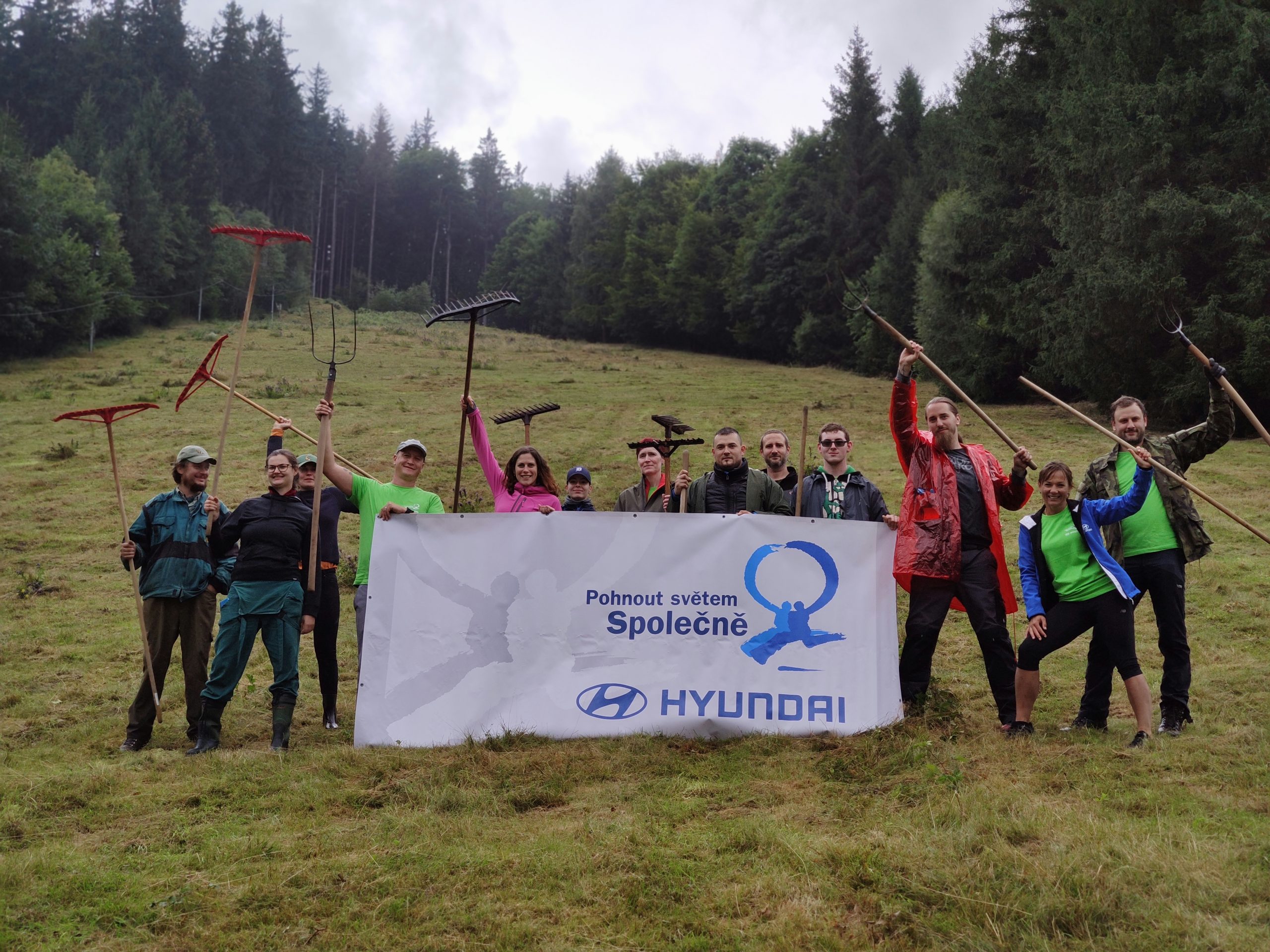 Nošovice, August 27, 2021 – Dozen employees of the Hyundai car factory in Nošovice exchanged their normal work for a rake and hard work in a meadow. In the Beskydy village of Ostravice, they helped as volunteers with the maintenance of a mountain meadow. The project is part of the newly established cooperation between Hyundai Motor Manufacturing Czech (HMMC) and ČSOP Salamandr.
In the Beskydy Mountains, flocks of sheep grazed on extensive mountain meadows for centuries. Many remote meadows have already overgrown in remote places, and those that remain have often lost their variety. Thanks to the original large area and diversity, however, something has been preserved.
The car manufacturer Hyundai in Nošovice, which has long cared for the protection of the environment not only in the plant, but also in its surroundings, is now helping conservationists with the development of these valuable Beskydy meadows. “We very much appreciate the cooperation we have established with the ČSOP Salamandr organization. Just as it is important for us to take care of the company’s premises, where we plant honey plants, shrubs and trees or place insect houses and birdhouses, so the space “behind the fence” needs to be taken care of. Preserving the diversity of nature and its heritage for future generations is a great commitment and we are glad that the restoration of the original Beskydy meadow will contribute to this. We are also very pleased that the employees themselves feel like getting involved in work. In the autumn, we are preparing two more volunteer events in the meadows, which they will be able to take part in,” said Barbora Hermanová from HMMC’s Public Relations Department.
While on Thursday it was necessary to rake and clean the areas after gentle mowing, next time the volunteers from the Nošovice plant will start planting the original species of herbs in another locality. In addition to Ostravice and neighbouring Čeladná and Staré Hamry, the project also aims to preserve mountain meadows and pastures at localities in Dolní Bečva, Prostřední Bečva and Velké Karlovice. A total of 49 hectares of space. The carmaker will support the project with CZK 500,000 this year.
“No super-rare plants grow on mountain meadows and pastures, but the uniqueness of these places lies in the unique set of plants, and sometimes in interesting and rare insects. Often these are the types of meadows and pastures that are unique throughout Europe. We take care of meadows that no one would otherwise care about otherwise. We maintain and support diversity at all levels,” said Vojtěch Bajer, chairman of ČSOP Salamander.
Thanks to the cooperation of HMMC and nature conservationists, the model restoration of the original meadow will begin this year in a new location with an area of approximately 1 hectare in the village of Krásná. Volunteers from the Nošovice car plant will also take care of cleaning this so-called “Hyundai meadow”.