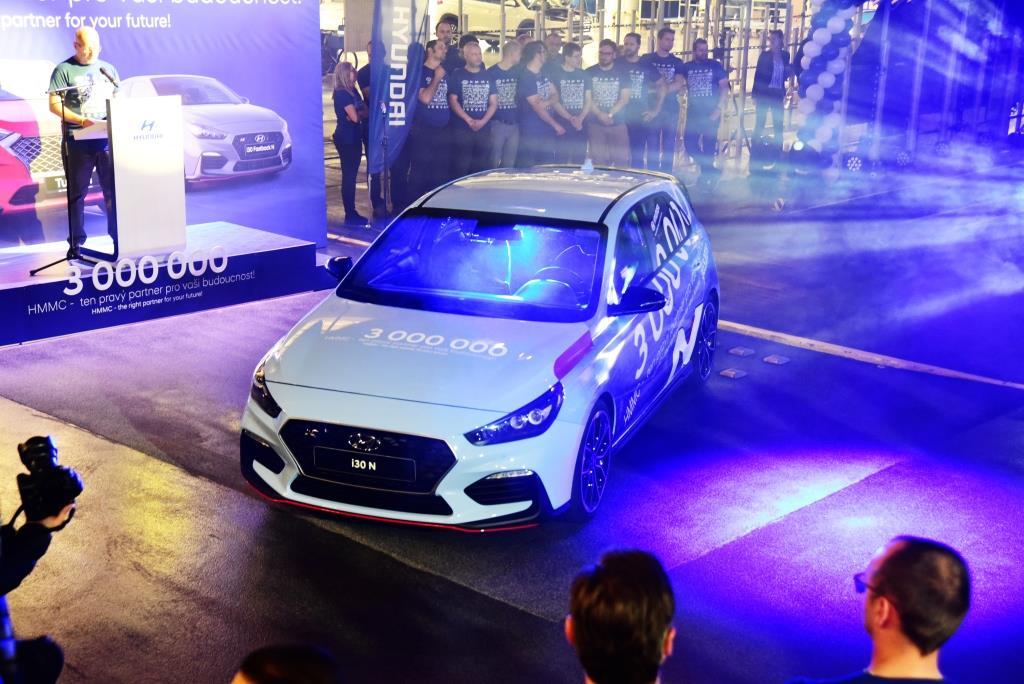 The Nošovice-based Hyundai Motor Manufacturing Czech (HMMC) is celebrating producing its 3 millionth car.  The car with the serial number 3000000, is a popular high-performance Hyundai i30 N, whose happy owner lives in Germany.

This success would not have been possible without the company’s employees, in whose honour and special ceremony was held on Thursday 30th May. The guests included representatives of the Moravian-Silesian region, the mayor of Ostrava, mayors of neighbouring towns and villages, representatives of major institutions, suppliers, Hyundai dealers and the media.

Most of production capacity at the HMMC car plant is devoted to the Hyundai Tucson, which, as well as the standard version, is also manufactured in an N-Line version and also as and Mild Hybrid, equipped with and pioneering 48 Volt system, which underlines the importance of new technologies for the future of clean mobility. The other models produced are the plant are three versions of the 3rd generation Hyundai i30 (hatchback, estate and fastback), two sports versions N (hatchback i30 N and Fastback N) and also the Hyundai ix20, production of which will soon end.

Dong Woo Choi, president of Hyundai Motor Europe, speaking in person at the event, said, “This is a major success in the history of the HMMC plant, which is the major supplier of Hyundai cars to the European market. I wish the plant and its employees good fortune for the coming years, as they continue to supply European customers with cars of the highest quality  and with the best technologies.“

“Passing production of three million cars is a fantastic milestone for HMMC, the most modern car plant in Europe,” said Donghwan Yang, president of HMMC. “I would like to take the opportunity to thank our employees, the members of team HMMC, who manufacture 1500 cars every day. Great work! I thank you!”

The Nošovice car plant of Hyundai Motor Manufacturing Czech (HMMC), the only Hyundai production plant in the EU, began mass production in November 2008 and employs 3300 people. and further 8700 people work for suppliers, who followed Hyundai from South Korea to the Moravian-Silesian region. The most modern European car factory makes use of over 500 robots, and, at and rate of 66 an hour, produces 1500 cars and day. Advanced technologies and world class systems, including waste management, ensure outstanding efficiency and quality, and minimize environmental impact.

This year’s production target is 318000 cars, which will be exported to 69 countries all around the world. Considering the fact that the HMMC plant in Nošovice is the only Hyundai manufacturing plant in the EU, it is no surprise that most of the cars were supplied to European countries.  However, significant volumes of cars from Nošovice were exported to major non-European markets, including Mexico, Egypt, Saudi Arabia or Australia.  4 % of total production is sold on the domestic market in the Czech Republic. The five major markets are Germany, the United Kingdom, Russia, Spain and Italy and together account for 49 % of total production.

Of the three million cars produced, 61 % have petrol engines and 39 % diesel, whereas currently that ratio is 79 % petrol to 21 % diesel.  In terms of gearboxes in the three million cars, 69 % are manual, 23 % standard automatic and 8 % dual clutch transmission, although the latter option is now the preferred gearbox in about 16 % of cars manufactured at HMMC.
It is worth and look at the changes in production speeds since production began in November 2008. The millionth car was produced in May 2013, taking 54 months. In June 2016, 37 months later, the 2 million mark was achieved, and in May 2019, the three millionth car was produced, only 35 months later.

The ceremony also included and farewell to the Hyundai ix20, which will now cease production after 8 years and 8 months. During that time the assembly line has created 315829 of this compact multipurpose vehicle, which is particularly popular in Italy, where more than 20 % of all ix20 cars were sold, and in Germany, the Czech Republic and the United Kingdom. In the Czech Republic the Hyundai ix20 has repeatedly been the dominant player in its market segment.