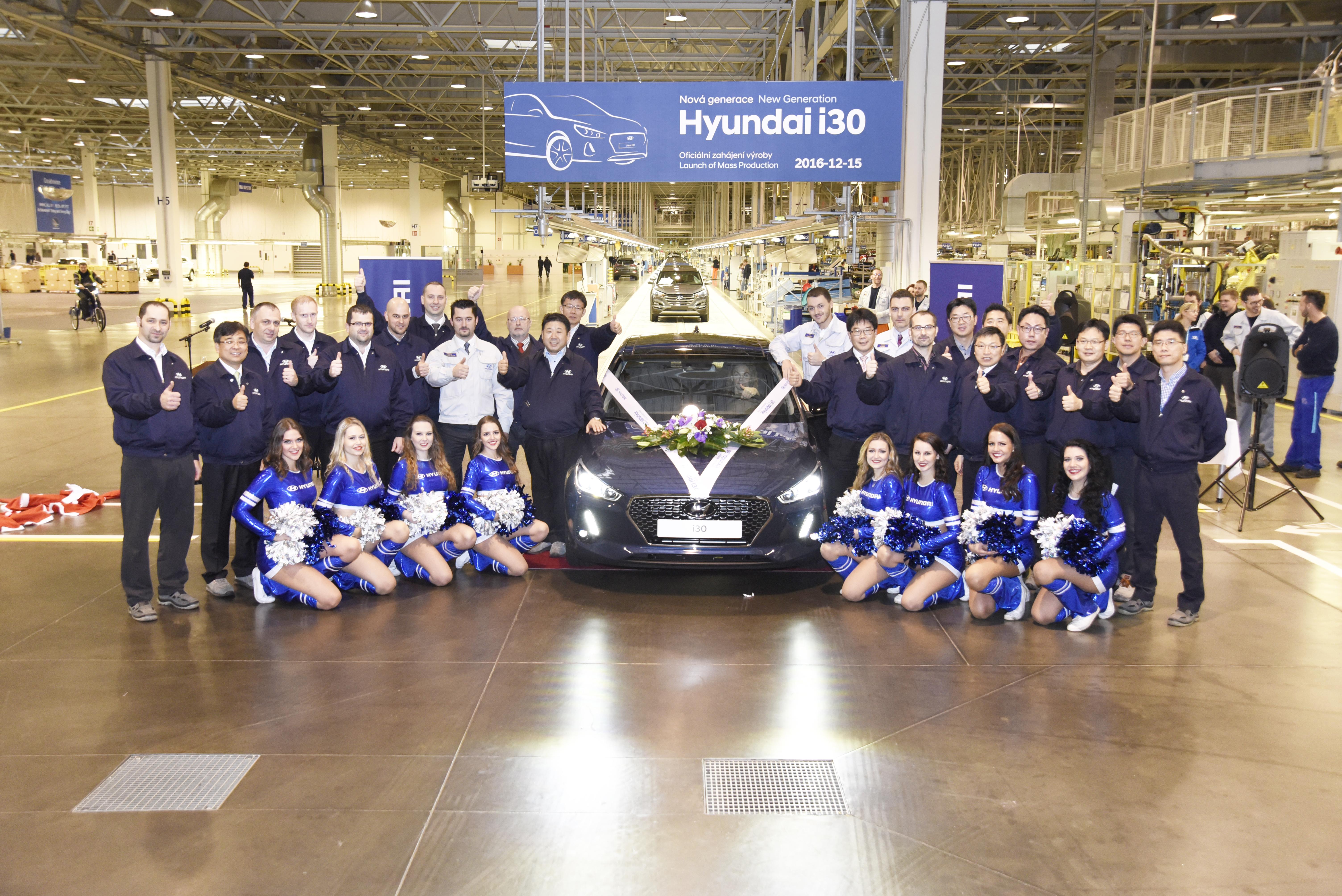 On Thursday, December 15th, shortly after 10 am, the first of the new third generation Hyundai i30 came off the production line and marked the official start of mass production. The five-door hatchback is the first version of the new generation of the i-30s, and in the course of next year there an estate version, and a motorized N-version will be introduced to the production program, and at the end of the year they will be joined by a sporty fastback.

Despite the harsh weather, the day at Hyundai Nošovice had a festive atmosphere: mass production of the third generation of the successful Hyundai i30 had begun!

The program began as early as five o’clock in the morning, when the Hyundai management team and department heads welcomed morning shift staff members and thanked them for their extraordinary efforts in preparing the production of the new model and to present them with a small gift. Similarly, workers who left the night shift after six in the morning, and later those in the afternoon, were rewarded. At nine in the morning, the new Hyundai i30 went on a journey through all the production halls, accompanied by music and accompanied by cheerleaders from the Fit & Fun club in Ostrava, known from the home games of Vítkovice ice hockey team.

The ceremony took place after ten o’clock at the end of the production line in the final assembly hall, where the specially decorated first production car was welcomed by several hundred HMMC employees. Vice President of Manufacturing Jong Hoon Lee thanked HMMC team members for their extraordinary work in preparing the production of the new model, and stressed that after this year’s world premiere of the new i30 at the Paris Motor Show, European market expectations are extremely high. “The new Hyundai i30 will become a pillar of our European sales, and this European market is extremely demanding and competition in the lower mid-range segment is unprecedentedly tough,” said Jong Hoon Lee, Vice President.

Deputy Head of Quality Martin Klíčník then thanked all HMMC employees for their work, commitment and determination and reminded us that, “today our work is not over – in fact it this is just the beginning. Our task is not to disappoint even a single customer and to make the new Hyundai i30 the most successful car in its category in Europe.”

In conclusion, several figures and facts: The first generation of the five-door hatchback Hyundai i30 was produced at the HMMC in Nošovice from the beginning of series production in November 2008 to December 2011, the second generation from January 2012 to the end of November 2016. This model represents the backbone of Hyundai sales in Europe, accompanied by the successful Nošovice SUV Hyundai Tucson and the smaller Hyundai i10 and i20 models produced in Turkey. Orders of the new generation of i30 are already at the limit of HMMC’s production capacity and sales in all European countries will begin in the first quarter of next year.

Last year, the Hyundai car plant in Nošovice exported cars to more than 70 countries around the world and increased its profit by 2.3%.

The complete model line of the new Hyundai i30 is already heading from Nošovice to Europe. The car manufacturer has also started production of a sporty version of the N Line

Hyundai car maker in Nošovice selected 35 projects across the Moravian-Silesian Region to support with grants in the total sum of CZK 640,000.