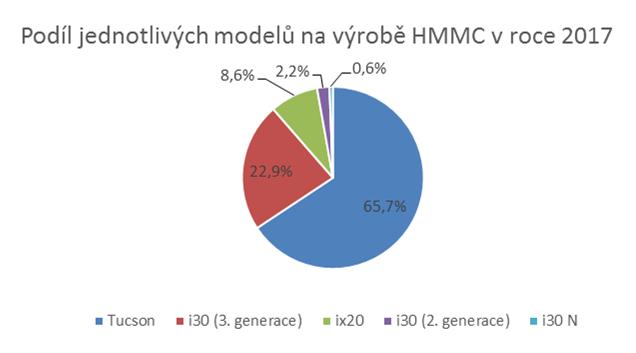 The original production target at the Nošovice factory for was 350000 Hyundai cars in 2017. In the end, 356700 cars left the Nošovice plant, 1.9 % above the target. The most produced model was the Hyundai Tucson, which was almost two thirds of the production.

“2017 was a great year for our factory. In addition to exceeding the original production targets and launching the production of new models i30 Estate, i30 N and i30 Fastback, our plant has also won a number of prestigious awards. In addition to the title “Safe Enterprise”, for the third time we have been awarded the National Quality Award in the Excellence category, and for the fourth time we have been named Employer of the Year. Also, we have been named Company of the Year for the Association of Automotive Industry for the seventh time,” says Petr Vaněk, head of PR at Hyundai Motor Manufacturing Czech.

In 2018, Hyundai Motor Manufacturing Czech will react to the automotive market situation and reduce the number of cars produced to 330000. This is due to a noticeable drop in UK orders and a slowdown in demand in all European markets. “The reduction in demand for cars applies to all models except premium cars and supersports models. This trend is evident in the entire automotive industry and all leading global brands are taking similar measures,” explains Petr Vaněk.

The reduction in production will not affect the number of employees in the Nošovice factory. Hyundai is addressing the situation by announcing 5 non-production days in the first quarter of 2018. “We currently have 3,300 employees, and there will be no changes in this number. We have cut down on working time, that is on the number of shifts. The non-production days will be related to the spring holiday dates in the districts of Ostrava, Frýdek-Místek and Karviná, where most of our employees come from. Two non-production days are also scheduled for Wednesday and Thursday before Easter,” adds Vaněk.

In 2018, Hyundai Motor Manufacturing Czech is planning a number of innovations. It will focus in particular on a thorough review and improvement of the emission performance of all engines. The ix20 automobile plant will also extend the production of the ix20 until the end of 2019 and in December 2018 the factory plans to start producing the sports version of the i30 N Fastback.

Last year, the Hyundai car plant in Nošovice exported cars to more than 70 countries around the world and increased its profit by 2.3%.

The complete model line of the new Hyundai i30 is already heading from Nošovice to Europe. The car manufacturer has also started production of a sporty version of the N Line

Hyundai car maker in Nošovice selected 35 projects across the Moravian-Silesian Region to support with grants in the total sum of CZK 640,000.