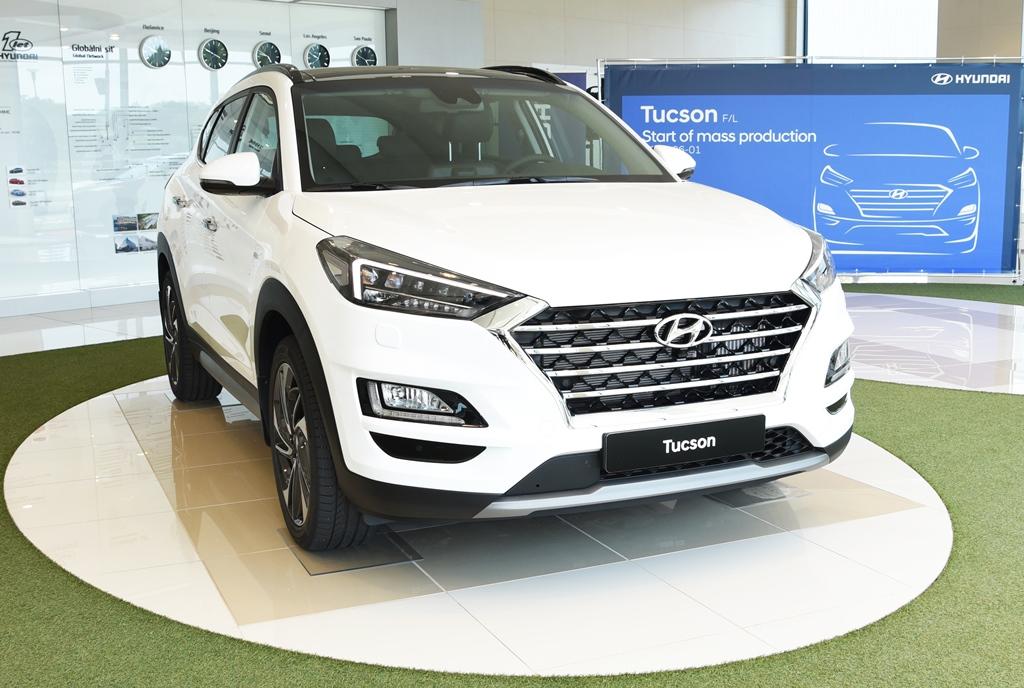 On Friday, June 1, Hyundai Motor Manufacturing Czech (HMMC) management and the representatives of the various manufacturing departments met in the lobby of the administration building to witness the inauguration and symbolic launch of the innovated version of the Hyundai Tucson. The new version builds on its predecessor, whose production began in June 2015, and whose three years in Nošovice produced nearly 700000 units. This popular SUV has become the bestselling Hyundai model in Europe.

In his opening speech, Donghwan Yang, HMMC President, highlighted the fact that Tucson is a pillar of production of the Nošovice car plant, representing about 65 % of the plant’s production volume, and thanked the employees for their efforts, diligence and commitment to preparing this model for mass production.

The new version of the Hyundai Tucson is distinguished by a new cascade grill, a symbol of the current design touches of the Hyundai brand. The front and rear lights are completely new, produced at the recently opened Hyundai MOBIS plant in Mošnov near Ostrava, and the existing xenon units have been replaced by lamps completely equipped with LEDs. The tailgate has been redesigned and the Tucson comes with brand new 18-inch or 19-inch alloy wheels.

The new interior impresses at first glance with the eight-inch display that protrudes above the instrument panel and the new design of the seats, perfectly matched to the overall interior of the car. The eye and heart of the new assistance systems is the multifunctional camera, located under the top edge of the windscreen, providing information for adaptive cruise control, road sign reading, lane departure monitoring and obstacle detection and emergency braking system activation. The new Tucson will be the first model of the Nošovice car plant Hyundai to be equipped with an SVM (surround view monitoring) system, displaying the car from a bird’s eye view, so the driver can safely see any obstacles on all sides of the car. This display system synthesizes images captured by four cameras, one in the front and rear bumper and two in the side rear-view mirrors. The new Tucson also enables wireless charging of smartphones and is equipped with the Krell music system. USB connectors at the front and rear are standard for charging phones while driving.

The engines have also undergone a major overhaul. All engines that drive the new Hyundai Tucson meet the EURO 6c standard. For petrol units, a particulate filter has been added, and for diesel cars, the previous 1.7 litre engine has been replaced with the all-new 1.6 engine. The two-litre diesel has undergone a major redesign in Korea to meet the strictest European emission standards.

The current version of the Hyundai Tucson will be produced in parallel with the new version until June 11th, so that all existing orders can be fulfilled. In the three years since June 2015, when Tucson began production, a total of nearly 700000 units will have been produced. For comparison, 603000 units of its popular predecessor, the Hyundai ix35, were produced in four years. The Hyundai Tucson has been exported to 67 countries and its largest customers are the United Kingdom (79000 cars), Germany (65000 cars), Italy (59000 cars), Spain (57000 cars) and Belgium (32000 cars). Some of its more exotic destinations include Reunion Island in the Indian Ocean (1260 cars), French Guyana (518 cars) and Iceland (901 cars).