4 000 000 cars from Nošovice to the whole world. Hyundai celebrates anniversary 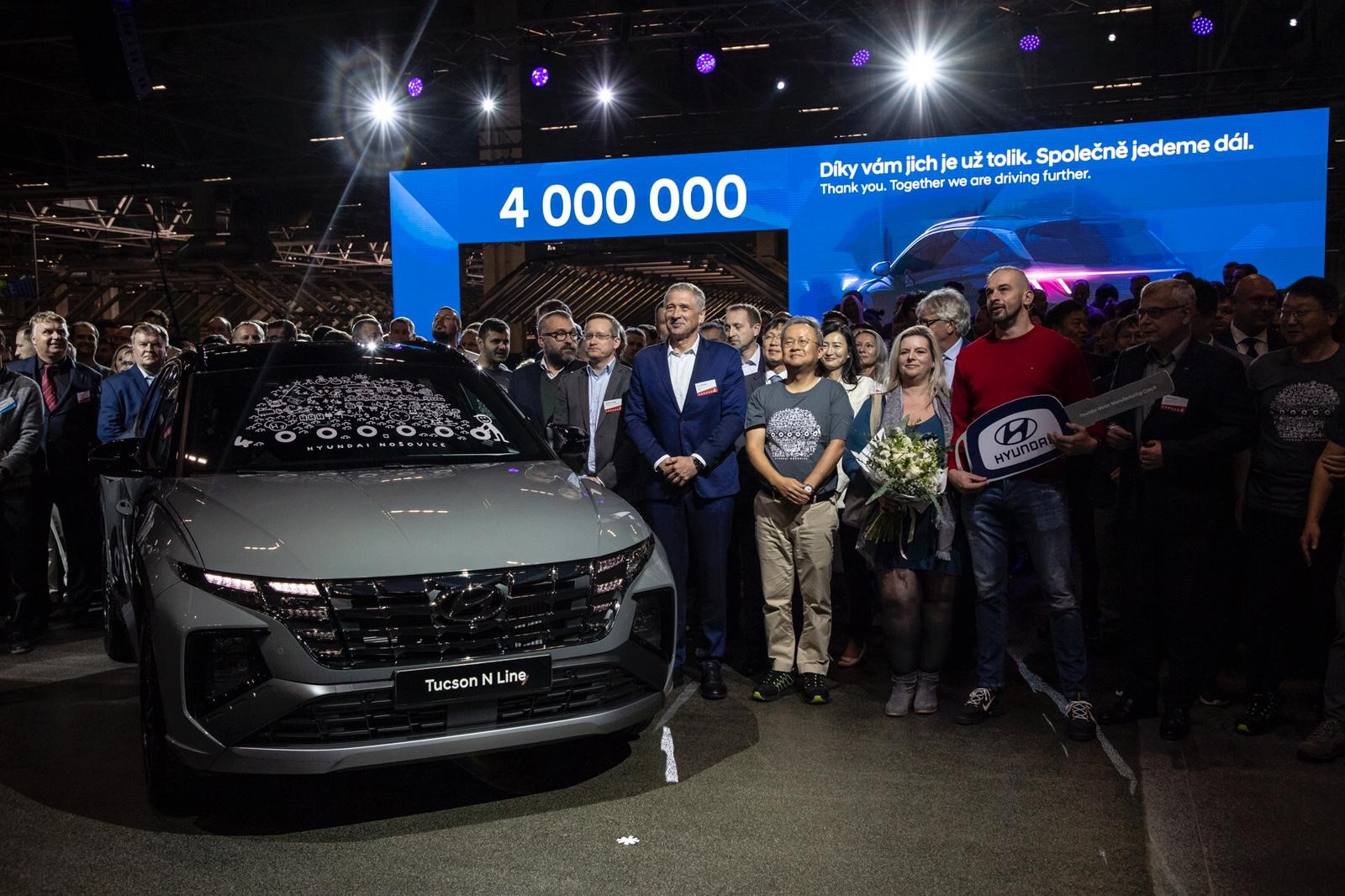 The first million cars in 2013, the second in 2016, the third in 2019 – and now again three years later, Hyundai in Nošovice has successfully passed another major milestone. On Monday, November 14, 2022, the 4,000,000th car rolled off the production line, which was the Hyundai TUCSON N Line with dynamic equipment and in a mild-hybrid version, designed for customer from Olomouc. Despite the pandemic, global supply chain issues and other external influences, Hyundai Motor Manufacturing Czech (HMMC) has managed to maintain a high production rate. This year, it expects to produce over 321,000 vehicles, surpassing the “pre-pandemic” year of 2019.

“Our employees and suppliers deserve immense credit for how they have managed to cope with the challenges of the past few years. I am delighted that, thanks to their skills and diligence, we are able to celebrate another rounded milestone. The Nošovice plant is of great importance to the Hyundai Group, and its significance will only grow in the coming years given the challenges facing the car industry,” said HMMC President Cheolseung Baek.

The fourth million cars produced reflected the trend of electrification. While until 2019, Nošovice produced cars exclusively with pure petrol or diesel power, production of the Hyundai KONA Electric, which became the first mass-produced new-generation electric vehicle in the country, started in early 2020. With the new version of the TUCSON model, which came into production in autumn 2020, production of hybrid and plug-in hybrid vehicles also started in Nošovice. On the contrary, the share of cars with diesel engines has been declining in the long term, with only 9% of them this year.

Electrified cars, i.e. electric vehicles, hybrids and plug-in hybrids, account for nearly 40% of production this year, and their share will continue to grow.

Cars from Nošovice not only for Europe

Germany remains HMMC’s largest customer, with over 14% of this year’s production heading there. The UK, Spain and France are next. The TUCSON leads the compact SUV segment in Europe this year, building on last year’s excellent sales results. But the popular SUV from Nošovice is also heading to the Middle East and other parts of the world in a big way. This year, cars from HMMC went to 66 destinations.

While Germany clearly dominates the overall ranking of the biggest buyers this year, the i30 is more evenly balanced. Germany and Poland share the top spot with virtually the same number of cars, while the Czech Republic is the third largest buyer of the i30 range – in the Czech Republic, the i30 is the best-selling model in the private segment this year. Slovakia, Austria and Romania are next. The KONA Electric car from Nošovice is the most sought-after car in Germany, France, Norway and Italy, while Australia is the second largest market after Germany for the sharp i30 N.

“We increased the production line speed from 57 to 65 cars per hour in April this year, and we have been able to maintain this even though we have to deal with a difficult global parts supply situation. We are experiencing strong demand for our cars and we are doing our best to satisfy our customers. We are also currently working hard on preparing for new projects that will be in production in the coming years. A team of our engineers is working on their development, not only to ensure the manufacturability of the car on our production lines, but also to verify its functional characteristics. Thanks to this, we also have the opportunity to influence the character and parameters of the cars,” said Martin Klíčník, Head of HMMC’s Production Subdivision.

Hand in hand with the new additions to the model portfolio go changes in production. Among other things, Hyundai in Nošovice is investing in technologically advanced automation. Examples include the transport of batteries for the KONA Electric from the warehouse to the production line by autonomous trolleys, and in the summer, for example, a new robotic station consisting of six robots was added to the Final Assembly Shop, which tightens all important chassis connections fully automatically.

The number of employees has increased year-on-year due to the increase in production, and HMMC now employs almost 3,300 people, 92% of whom are Czech citizens. The average employee is over 38 years old and has been with HMMC for over 8 years. The company offers its employees above-average financial compensation and a wide range of employee benefits within the Moravian-Silesian region and the whole country.

Together for dreams: we support talented students