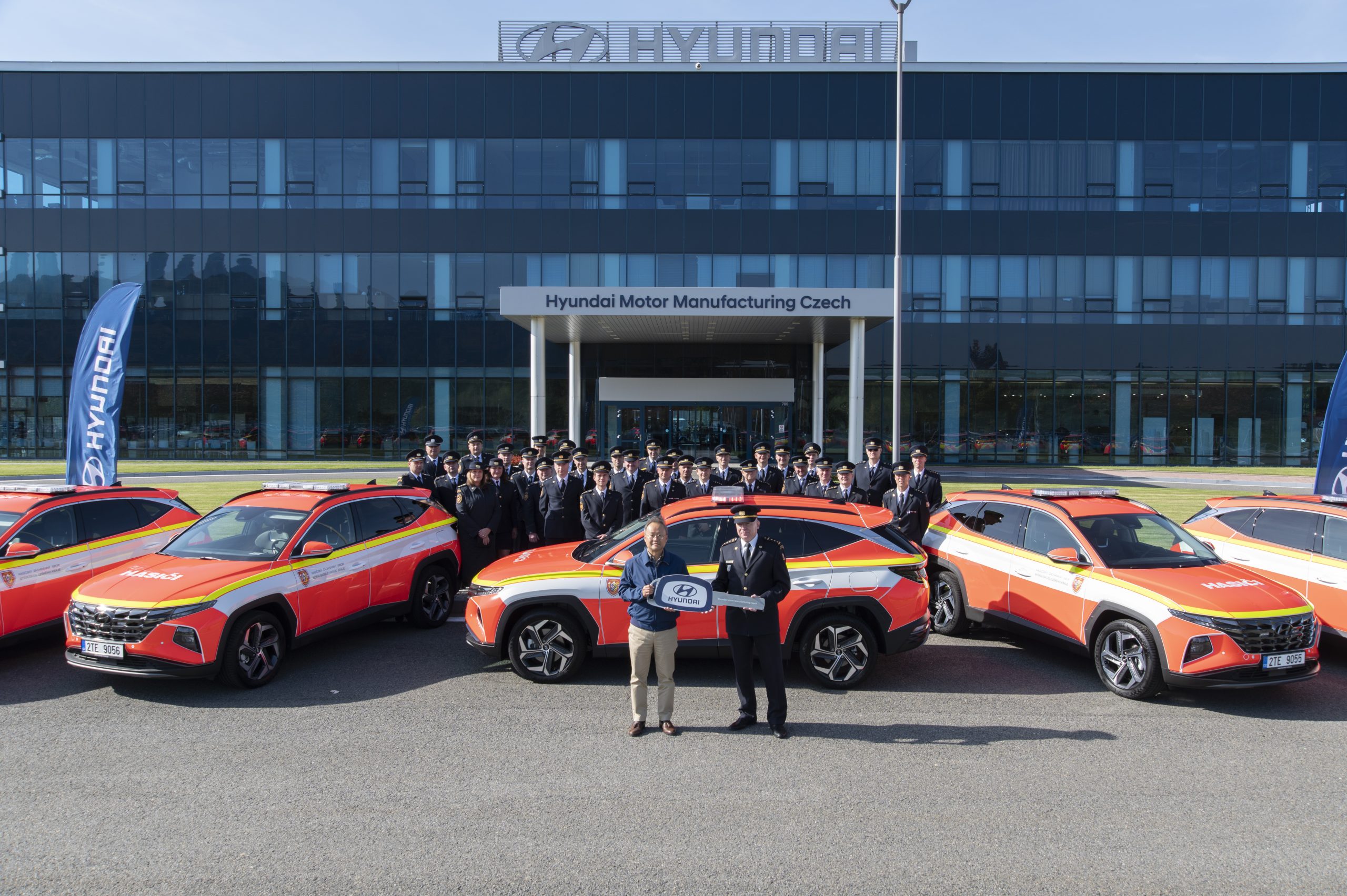 Twenty-four new and fully equipped Hyundai Tucson vehicles in firefighter colors are now serving the needs of firefighters in the Moravian-Silesian region. They were handed over to them by the Hyundai plant in Nošovice. Thus, the long-term and multi-level cooperation between the car manufacturer and the fire brigade continues.

The company Hyundai Motor Manufacturing Czech (HMMC) already played an important role years ago in the construction and creation of the Nošovice station of the Fire Rescue Service of the Moravian-Silesian Region (HZS MSK). It also contributes a significant amount of more than 20 million CZK to its operation each year, based on the contract concluded during the construction of the plant between HMMC, the Moravian-Silesian Region and HZS MSK, according to which HZS MSK performs the tasks of the HMMC fire rescue unit.

By mutual agreement, the financial performance for this year is partially replaced by the delivery of 24 cars of the Hyundai Tucson model, which in the long term makes up approximately three quarters of production at HMMC. The Tucson is, among other things, the best-selling car in the European compact SUV segment this year – the version for firefighters in the Style Premium trim level also includes specific firefighting equipment, including light and sound warning devices and a radio station. All vehicles for firefighters have a gasoline mild-hybrid 1.6 l T-GDI engine with an output of 180 hp and a 7-speed dual-clutch automatic transmission including practical all-wheel drive, thanks to which the SUV from Nošovice is not afraid of the terrain. The cars will serve as command vehicles in each of the 23 fire stations in the Moravian-Silesian region and also in the chemical laboratory in Frenštát pod Radhoštěm.

“We are rightly proud of our Tucson thanks to its success and popularity with customers. We greatly value the long-term and mutually beneficial cooperation with the members of the fire and rescue service, and we are happy that all 24 Tucson vehicles will help in their important and demanding service,” said HMMC President Cheolseung Baek.

“Nošovice Hyundai has been a reliable partner for us since the beginning of its operation in the region. We have long-term cooperation in a wide range of areas. We are therefore happy that, as part of the necessary replacement of our command vehicles, we acquired a Hyundai Tucson model from Nošovice, which fully meets our needs,” said the director of HZS MSK Radim Kuchař, who officially took over the cars on the premises of the Nošovice car factory on Monday, October 10.

Together with the fire brigade, Hyundai regularly organizes a number of events. Firefighters go to the premises of the car company to train on the constructions and new technologies of the cars produced here, so that they are as well prepared as possible for interventions in traffic accidents, and employees together with professionals practice, for example, the evacuation of production halls. Not long ago, Hyundai from Nošovice also handed over 19 cars of various models to the fire department for the needs of the September Championship of the HZS CR in extrication from traffic accidents in Kroměříž. Among them are pre-series or incomplete cars from earlier production. Hyundai from Nošovice regularly donates cars intended for practical training of rescue techniques to firefighters. HMMC is also a partner of the Moravian-Silesian League of Young Firefighters in fire sports.

4 000 000 cars from Nošovice to the whole world. Hyundai celebrates anniversary

Together for dreams: we support talented students